SUPPORT LOCAL BOOKSTORES ~ THE HEARTS OF ALL ON FIRE

THE HEARTS OF ALL ON FIRE 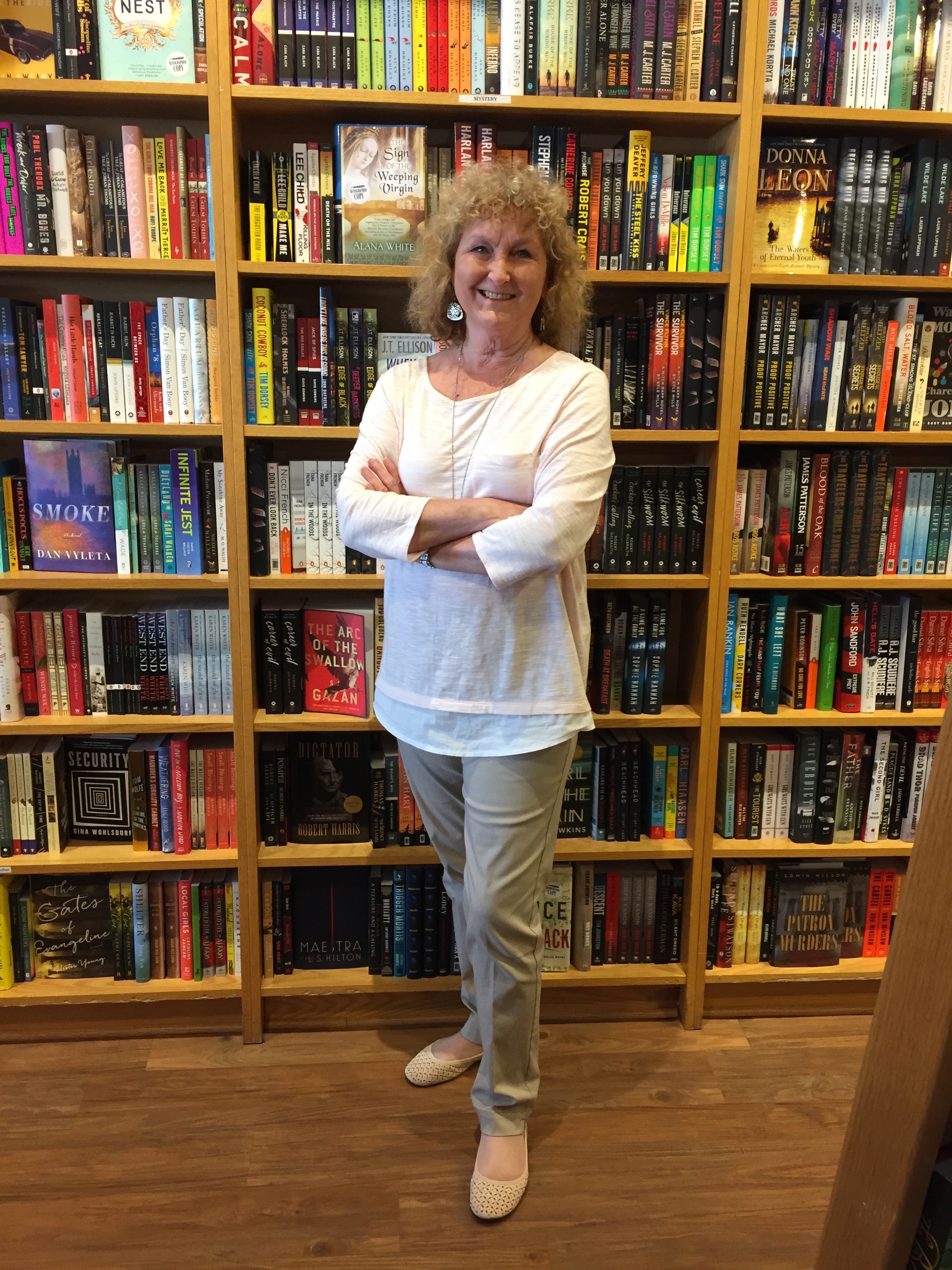 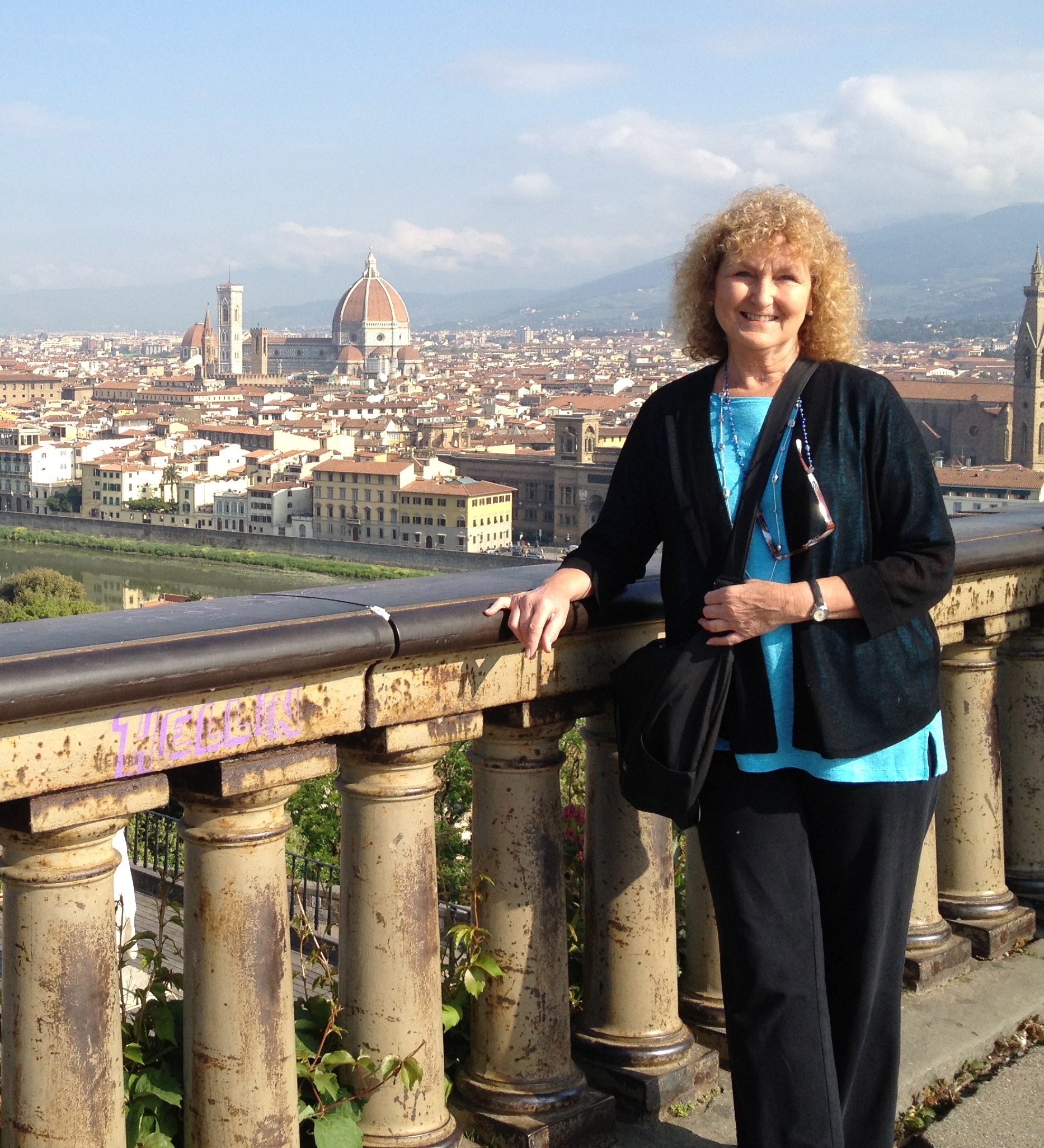 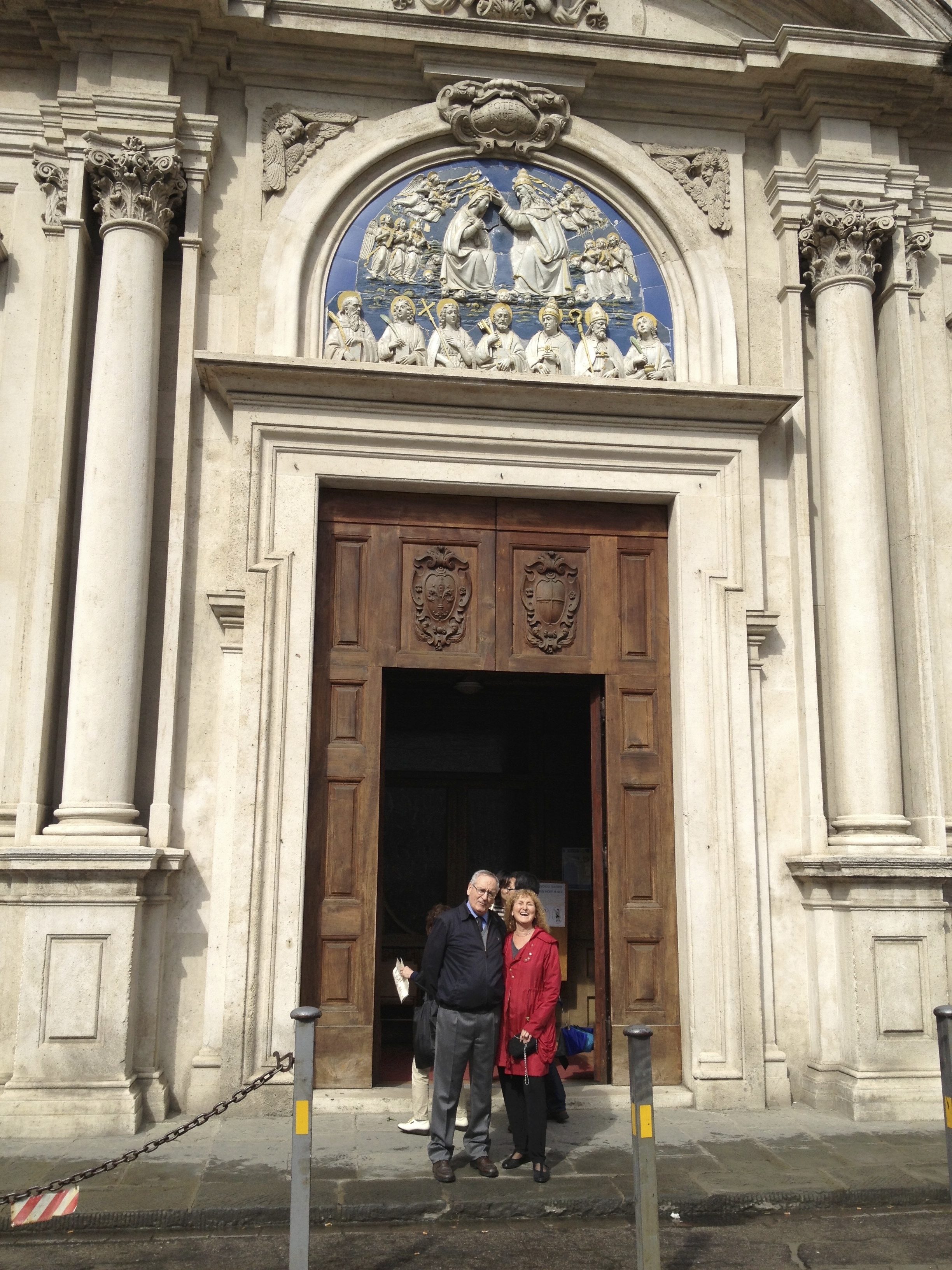 Spring 2013 ~ With A new Florentine Friend at Ognissanti Church, Florence. This is the Vespucci Family church & figures prominently in "Weeping Virgin."

Several years ago, in an aged issue of "National Geographic Magazine," I read of the infamous Sunday morning in April 1478 when in Florence Cathedral assassins attacked Lorenzo and Giuliano de' Medici, the young "de facto," or unofficial, leaders of the Florentine Republic. That Sunday Giuliano fell to the church floor with his skull split in two, while Lorenzo drew his sword, leapt the altar, and escaped to the sacristy with a few friends. Fascinated, I read countless books written about the Pazzi Conspiracy, as this colorful event in Italian Renaissance history is called. This led me to real-life lawyer/ambassador Guid'Antonio Vespucci, who was a Medici man throughout his long, illustrious career, and to Guid'Antonio's nephew and secretary, Amerigo. In the Guid'Antonio mystery series, Guid'Antonio is cast in the role of private investigator. Alongside him stands Amerigo, who serves as Guid'Antonio's Dr. Watson/Captain Hastings.

When I travel, I enjoy going to Italy, especially to Florence, of course. I collect books on the Italian Renaissance, particularly those about Lorenzo de' Medici and his circle, which included not only Guid'Antonio and Amerigo, but also their friends and neighbors Sandro Botticelli, Leonardo da Vinci, poet Angelo Poliziano, and other fifteenth-century luminaries. I've published several short stories with the Vespuccis as my protagonists (one story was a finalist for the Macavity Award given by Mystery Readers International), and my book reviews appear regularly in the "Historical Novels Review." I'm a member of the Historical Novel Society (serving in the past as Agent/Editor Liaison & Secretary for the North American conferences), the Authors Guild, and the Women's National Book Association. For HNS, I am the MidSouth Chapter Lead.  I am also a member of Mystery Writers of America and a member and past president of the Middle Tennessee Chapter of Sisters in Crime, an international organization for mystery writers and readers.

Upon graduation from Western Kentucky University in Bowling Green, Kentucky with a master's degree in English, I moved to Nashville, Tennessee, where I live with my husband, our black cat, and our two (!) feisty Schnauzer-boys. 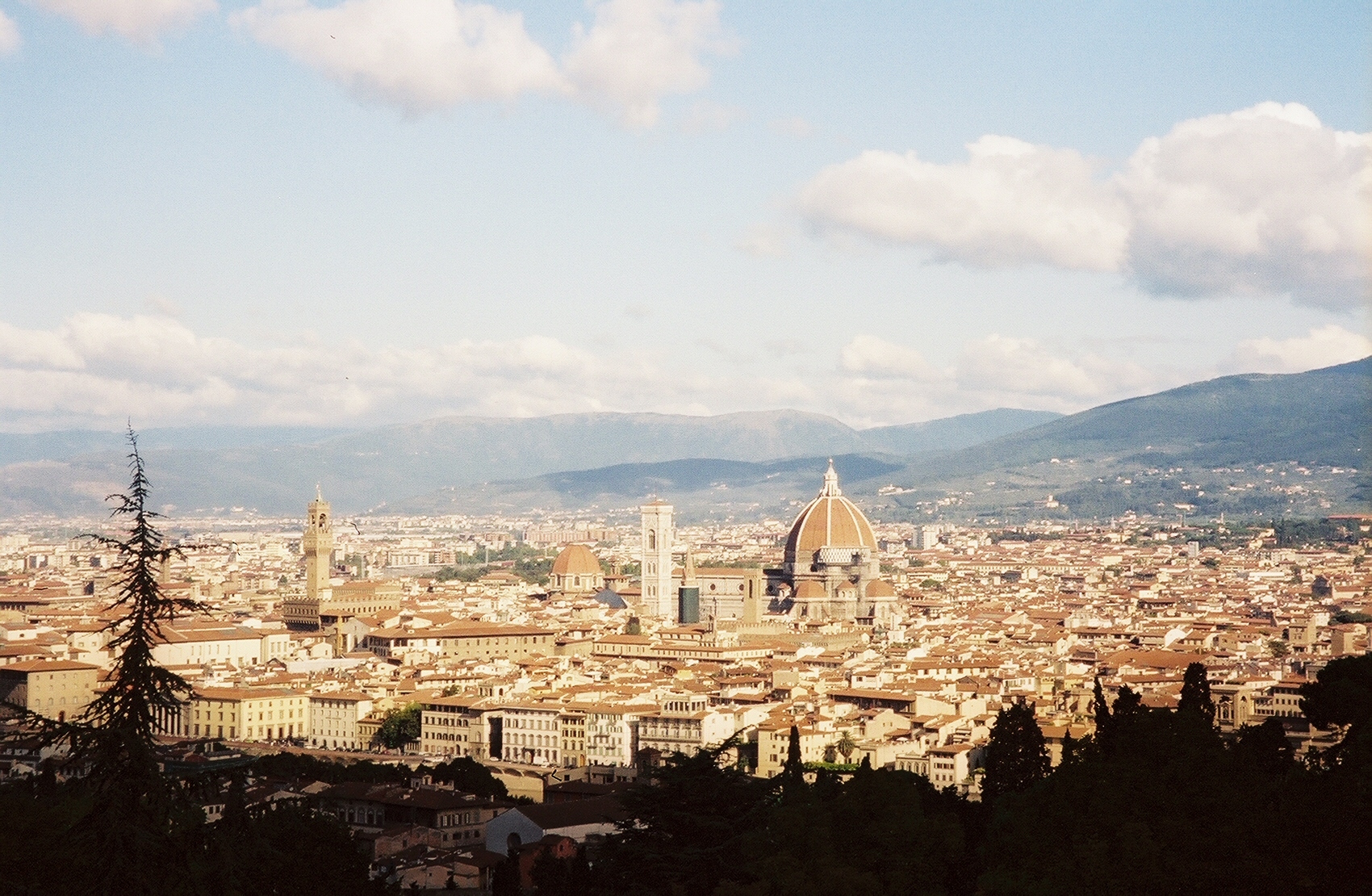 Florence ~ My kind of town.

~ And a little bit about Guid'Antonio Vespucci and Renaissance Florence ~

Guid’Antonio was the son of Antonia Ugolini and Giovanni Vespucci. By the time of his birth in 1437, the Vespuccis ranked among Florence’s leading families, with holdings in rental properties, vineyards, olive groves, silk shops, and wool. Like the sons of all wealthy Florentines, Guid’Antonio would have been educated in Latin, arithmetic, and logic. As a young man, in Bologna and Ferrara, he studied civil law, rhetoric and poetry, the latter two deemed essential for the Renaissance practice of diplomacy. For his profession, he chose Doctor of Law, thereby gaining the right to wear that blood-red robe.

Guid’Antonio believed in the maintenance of legal order and the utilization of the abilities of the cities’ most able citizens. Thus, from the first days of his career, he supported the Medici family in its private administration of the democratic Florentine government.

While in his early thirties, Guid'Antonio served as one of the Florentine Republic’s nine Lord Priors (the state’s highest-ranking council). From 1469 onward, his close bond with Lorenzo de' Medici saw them through Lorenzo’s troubled ascendancy as the unofficial prince of the city until Lorenzo’s untimely death in 1492 at the age of forty-three. During those years, Guid’Antonio and Lorenzo survived the Pazzi Conspiracy (1478) and the ensuing war, with Guid’Antonio traveling to Rome and France and back to Rome again as Florence’s/Lorenzo’s diplomatic agent to Pope Sixtus IV and King Louis XI.

When Guid’Antonio was about thirty-four, he married his second wife, Maria del Vigna, and, as in "The Sign of the Weeping Virgin," they had a son, Giovanni. Of all his nephews, Guid’Antonio was particularly close to Amerigo, who accompanied Guid’Antonio to France as his secretary in October 1478 and spent almost two years with him at the French court. Back home in Florence, Amerigo eventually went to work for Lorenzo, and then for Lorenzo’s cousin and former ward, Lorenzino de’ Medici, finally sailing west and into the pages of history, while his Uncle Guid’Antonio played his part as one of the most influential and powerful personages of his time (battling Savonarola, for one thing) until his death on Christmas Eve in 1501.

Guid'Antonio lived in an age when Italians already spoke of the “rinascimento,” an era in which a new spirit of rebirth in life, art, and literature prevailed. Nowhere was this more evident than in Florence, a city of about 50,000 souls at this time in history. Within the town’s walls, Guid’Antonio and Amerigo rubbed elbows with their neighbors, Sandro Botticelli, Leonardo da Vinci, Paolo Toscanelli, and so many other Renaissance luminaries, while at their heart there stood the controversial, charming, and brilliantly talented poet and politician, Lorenzo de’ Medici, often called “Lorenzo the Magnificent.”